Halalisa Singers present ‘Up to the Mountain’ 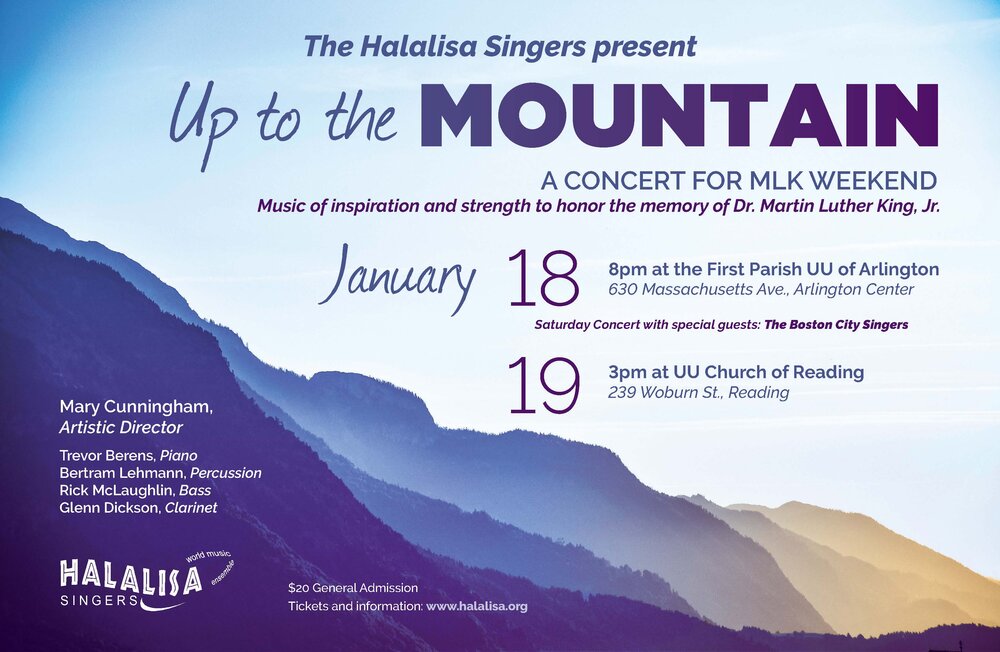 Artistic Director Mary Cunningham leads the Halalisa Singers in Up to the Mountain, a concert to celebrate Martin Luther King Jr. Day. Joining the chorus for the Saturday concert will be high school vocalists of the Boston City Singers. Accompanying the singers will be pianist Trevor Berens, percussionist Bertram Lehmann, clarinetist Glenn Dickson, and bassist Rick McLaughlin. Performance on Saturday, January 18 at 8 p.m. at First Parish Arlington, 630 Massachusetts Avenue, Arlington. Performance on Sunday, January 19 at 3 p.m. at Unitarian Universalist Church of Reading, 239 Woburn St., Reading. Admission for each concert is $20. For information and tickets call 781-648-5579 or visit http://www.halalisa.org/concerts.

Up to the Mountain features music embracing Martin Luther King Jr.’s themes of equality and inclusion, including uplifting gospel numbers and spirituals. In the Kirby Shaw arrangement of “I Wish I Knew How It Would Feel to Be Free” by Billy Taylor and Dick Dallas, the chorus sings of freedom and speaking the truth. The women offer a stirring rendition of “I’m on My Way,” the traditional spiritual made famous by Mahalia Jackson, heard here in an arrangement by Anthony Trecek-King. The men of Halalisa bring the house down with a powerful version of “Didn’t My Lord Deliver Daniel.”

Nick Page’s arrangement of “Gonna Get Through This World” by Woody Guthrie and Lisa Gutkin is inspired by the Klezmatics reworking of the song and features robust choral singing, klezmer clarinet, and a niggun. “We Are One” is an inspiring full choral piece written by beloved contemporary choral composer Brian Tate. MLK-inspired songs written by contemporary pop and folk musicians include James Taylor’s “Shed a Little Light” (arranged by Greg Jasperse), which begins with the lyric, “Let us turn our thoughts today to Martin Luther King” and proceeds with spirited thoughtfulness. Patty Griffin’s moving “Up to the Mountain” (arranged by Mac Huff) is a gospel folk song based on King’s famous “Up to the Mountain” speech, with the chorus accompanying a soaring lead soloist.

International music on the program includes “Ani Ma’amin (I Believe),” a traditional Jewish tune arranged by John Leavitt. The song gained heartbreakingly tragic significance during the Holocaust, when thousands of Jews sang it as they marched to their deaths. The rhythmic, exciting “Baby Yetu” is a Swahili adaptation of The Lord’s Prayer by Chris Kiagiri, set to music by Christopher Tin. The sultry, gorgeous “Gracias a la Vida” by Chilean artist and songwriter Violeta Parra, created as part of the political folk movement nueva cancion, finds joy amidst struggle and hardship. “Graduation Song,” with music by Andrew-John Bethke and words by Simthembile Xekatwana is sung in three African languages and a bit of Latin, and contains the name of the chorus, Halalisa, the Zulu word for celebration. “Tsunangari” by Kentaro Sato was written for victims of the 2011 earthquake and tsunami in Japan. Its gentle melodies and sublime harmonies provide an emotionally resonant container for Japanese lyrics about truth, hardship, homeland, and connection.

Mary Cunningham is in her sixteenth season as Artistic Director of the Halalisa Singers. She leads the ensemble in reaching out to wider audiences and performing an ever-widening repertoire. Following her vision to share their music across the Boston area, Halalisa has now performed for audiences in the communities of Acton, Arlington, Bedford, Boston, Cambridge, Concord, Hanover, Hingham, Harvard, Littleton, Melrose, Roxbury, Wellesley, & Winchester. With their special sound and mission, the Halalisa Singers have been sought after to perform at Multicultural and Diversity events, Benefit concerts and International festivals in the Northeast and Europe. Ms. Cunningham earned her Masters in Music at the Cleveland Institute of Music after degree training at the Mozarteum in Salzburg, Austria. She is well known in the Boston area as an active conductor, vocalist, and flute soloist. She is the Music Director at the Unitarian Universalist Church of Reading, is a member of the American Choral Directors Association and the Assoc of UU Music Ministries. A frequent performer with the Christmas Revels, Mary is on the faculty of the Powers Music School in Belmont, and has a private teaching studio in her Medford home.

Pianist, composer, and accompanist Trevor Berens plays in many different styles, specializing in avant-garde classical music, traditional classical music, and free improvisation. Trevor holds degrees from Loyola Marymount University (BA: Music—Piano, Composition and Psychology), California Institute of the Arts (MFA: Performer/Composer), and Lesley University (MA: Expressive Therapies with Music Therapy specialty). As a collaborator, he enjoys working with solo vocalists and instrumentalists, chamber groups, choruses, and with dancers and actors. Trevor is the founder, pianist, and resident composer of the nine-member new music ensemble Sonic Liberation Players. He is a licensed music therapist who currently works with the elderly, young children, and as a supervisor with master’s level interns. Trevor is the Staff  Pianist at the UU Church of Reading and with his wife Jessica, he runs the Berens Voice and Piano Studio out of Lincoln, MA.

Rick McLaughlin, bass, has performed with Mahmoud Ahmed, Don Byron, the Either/Orchestra, Mick Goodrick, Steve Lacy, John Medeski, Antonio Sanchez, Miguel Zenon, and others. His recordings include Study of Light (Rick McLaughlin Trio), A Celebration of the Spirit (Jazz Composers Alliance Orchestra, and Mood Music for Time Travelers (Either/Orchestra). He is an Associate Professor at The Berklee College of Music.

Glenn Dickson, clarinet, has had a varied career playing klezmer, jazz, rock, Balkan, and ambient music. His klezmer band, Shirim Klezmer Orchestra, has performed concerts and festivals across the United States, Canada, and Europe, with recordings including the Klezmer Nutcracker and Pincus and the Pig, a collaboration with Maurice Sendak. The band has played live on the CBC and with the Philadelphia Pops. Glenn’s music has been used by Woody Allen (“Deconstructing Harry”) and he played on the soundtrack of the motion picture “A Stranger Among Us.” His klezmer-fusion band Naftule’s Dream has played major jazz festivals in the United States, Canada, and Europe, including the Berlin, Montreal, and New York Jazz Festivals, and recorded for John Zorn’s Tzadik label as well as the Innova label. Glenn is the recipient of a Massachusetts Cultural Council Artist Grant in composition.